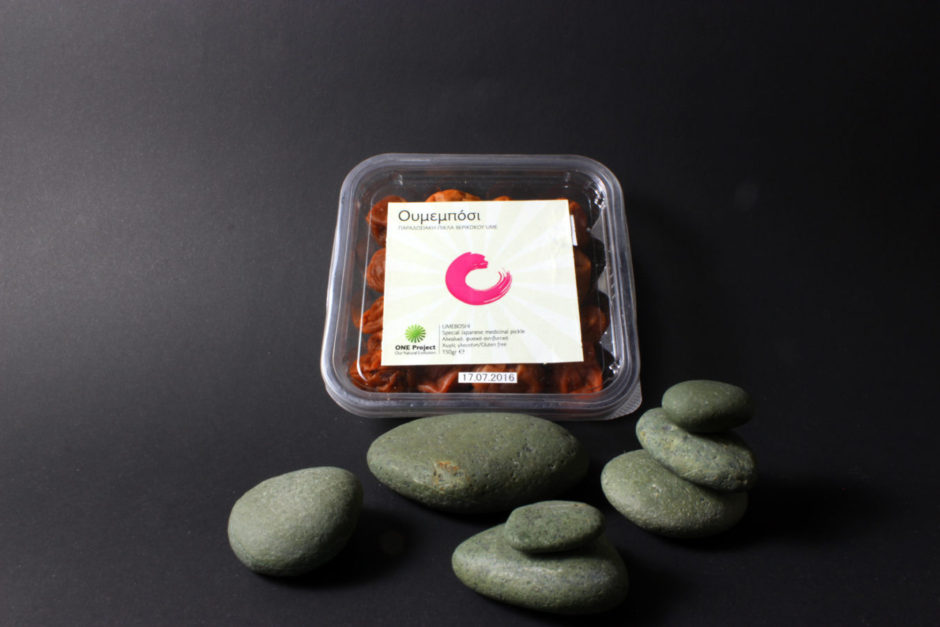 The “King” of alkaline foods.
It immediately changes the pH of the blood. It is used in therapeutic preparations, but also as food accompaniment.

A product of traditional savory wisdom
Packaging: 400gr
Biological certification
Non pasteurized product. After opening keep it in well sealing container so that they don’t dry.

Benefits
Umeboshi and its derivatives such as Ume vinegar ONE Project (Ume Su) are rich in organic acids (citric acid, pyruvic acid, malic acid, and succinic acid). Citric acid helps to sterilize the intestine and stomach, especially in the morning that is empty and pyruvic acid activates the functions of various body organs.

Production method
The Umeboshi pickling process is known as “lactobacterial fermentation”, one of the oldest food processing methods, in which beneficial probiotic lactobacteria grow instead of other non-desirable ones.

Ume apricots are harvested at the end of June, when they are still unripe and their juices are at the peak of their sourness. Then they are washed, soaked to remove the bitterness, and stacked in layers with salt within containers. Slowly their liquids are juiced out. At the end of July they are spread on bamboo disks under the strong sun, to dehydrate a little. Afterwards, they are replaced in containers with their liquids and Shiso leaves (perilla frutensis) from which they acquire their red color, lemony taste, many minerals and antibacterial and preservative properties. Finally, they are removed from the containers and placed in bins where they mature for one year. The red liquid that remains is bottled and sold as Ume Vinegar, one of the most characteristic and delicious Japanese seasonings.

Science on Umeboshi
It has been used for centuries by traditional Far Eastern medicine in Japan and China, while its derivatives have been researched by Japanese researchers for their strong healing properties. It is considered by many therapists as one of the most effective therapeutic foods in the world.

Using Umeboshi
Together with the Kuzu and Soy sauce ONE Project, we can makes UmeShoKuzu cream recipe, which enhances the digestive function and alkalizes the organism, with multiple benefits. Mixed with ground roasted seeds, water, Mirin, Soy sauce can be used in sauces for salads, cereals, sauteeing, Sushi and other dishes. Mixed in Kukicha tea, makes a beverage that neutralizes fatigue from over-consumption of sugar.

What to look for when shopping
The traditional method of production, ensures the high quality of the product and its unique healing properties. Most Umeboshi producers are using sugar, dyes, additional organic acids and common salt to speed up the process. The best way is to inspect the ingredients, which should be of organic origin and include Organic Apricots, Shiso Organic leaves and Sea salt, just as the Umeboshi ONE Project have.