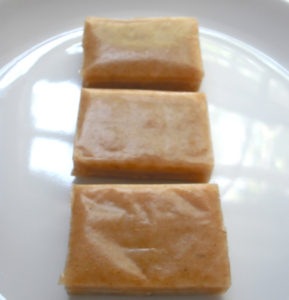 Mochi is a traditional product of Japanese culture, and not just gastronomy. It is strengthening and very nutritious, for a number of cases.

Mochi is made from steamed steamed mochi rice and then pounded until it becomes dough, which is placed in molds to dry and become a solid bar. It is an essential ingredient in everyday life but and in rituals and customs of Japanese culture. Although it began as the exclusive privilege of noblemen, it has become a popular dish for centuries.

Benefits
Due to the “hammering” process, Mochi becomes dense than the steam-cooked rice. This provides about 1.3 more energy value than rice. It is digestible and contains (due to rice) Phytin, which protects against cancer, fatty liver infiltration, atherosclerosis and gritosis, while it is high in dietary fiber that helps in constipation. In Japanese folklore and folk medicine it is used as a dairy and booster for pregnant and nursing women, while strengthening the body in diseases, anemia and weakness.

Because of the texture it gets when melted, it can be used as a replacement for cream and other dairy products.

Use
Can be used in soups and sauces, after melting and giving a very rich and creamy texture. It is also a tonic snack if heated in a non-stick pan with minimal oil until it is inflated and consumed with rice syrup or a little ONE Project soy sauce, depending on whether we want a sweet or salty taste.